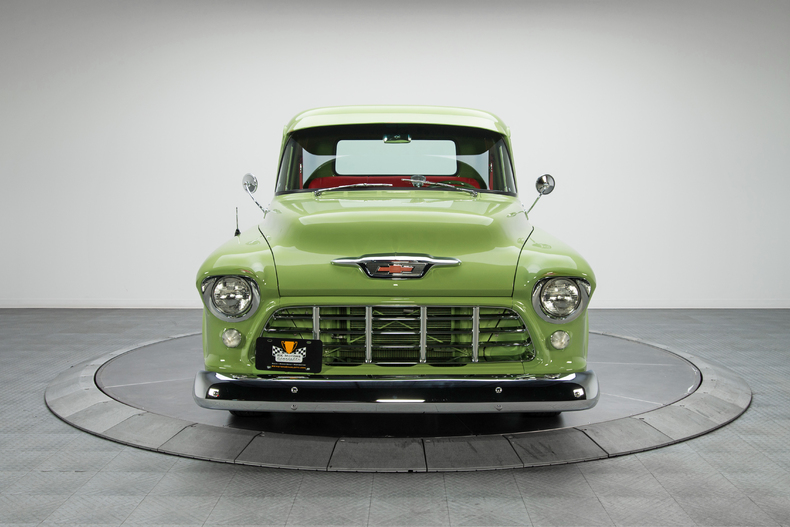 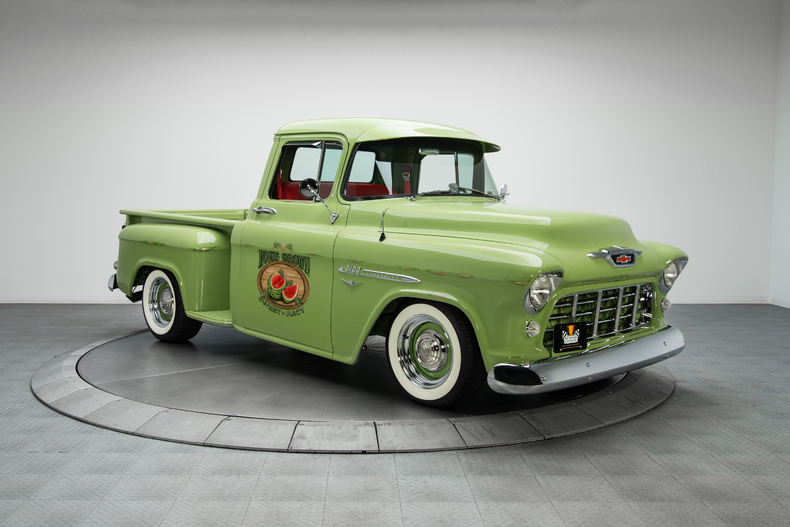 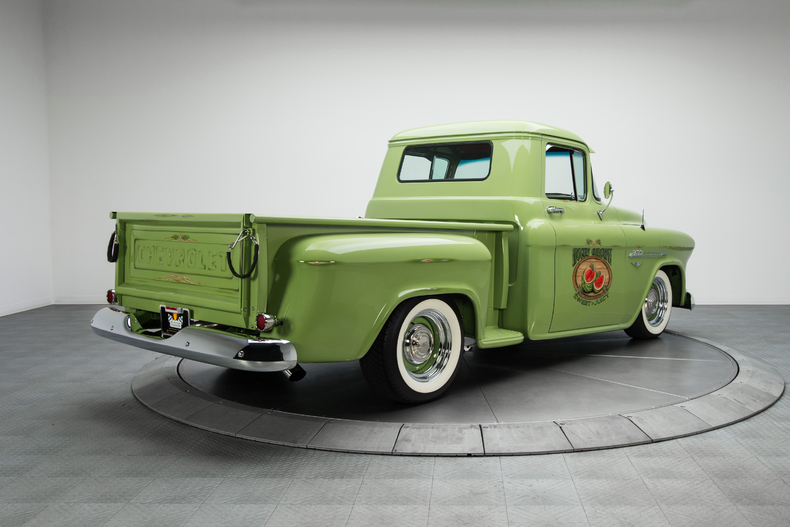 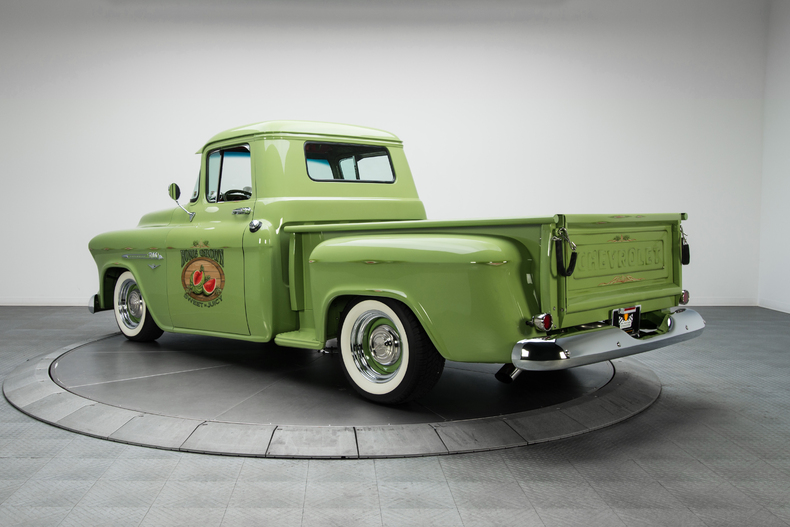 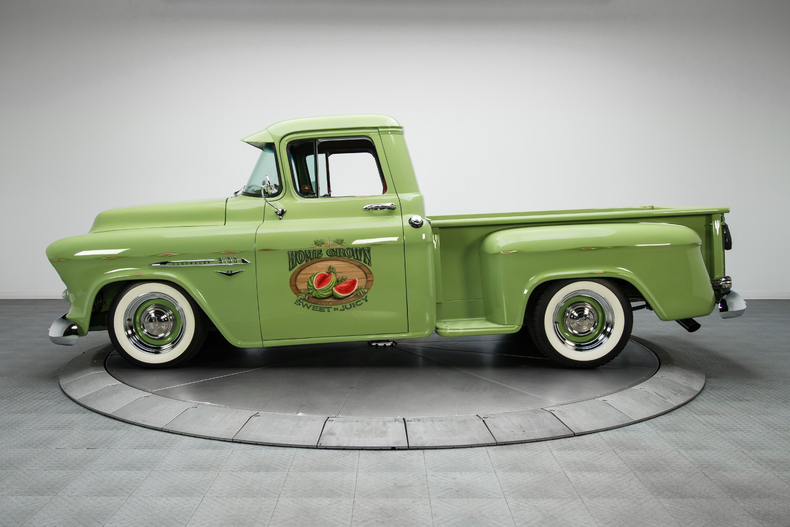 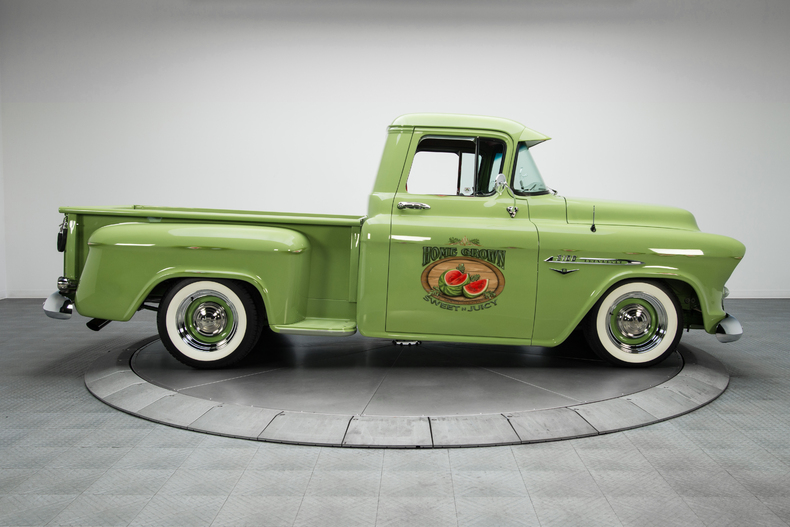 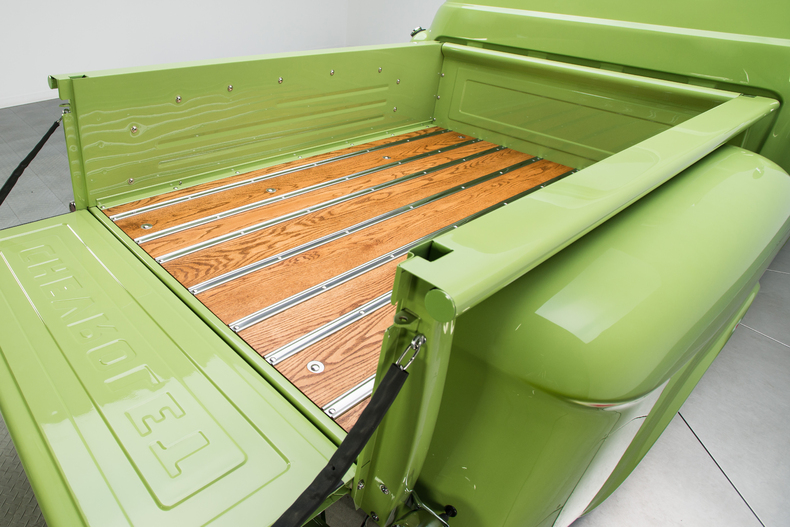 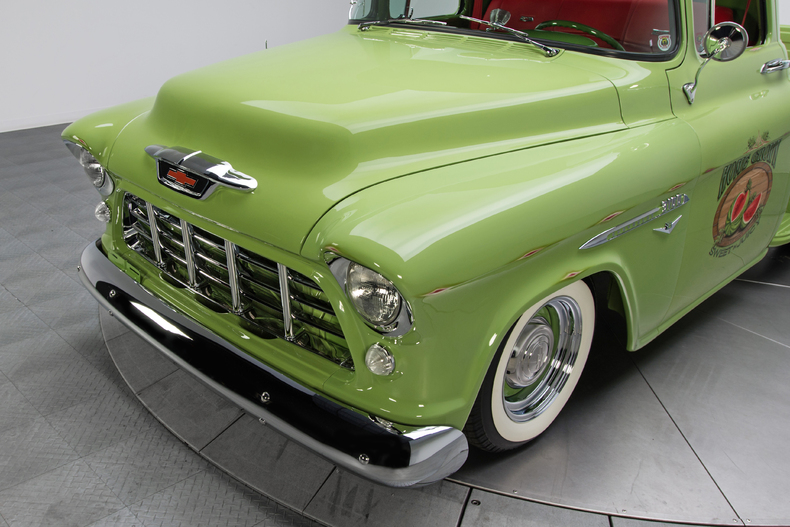 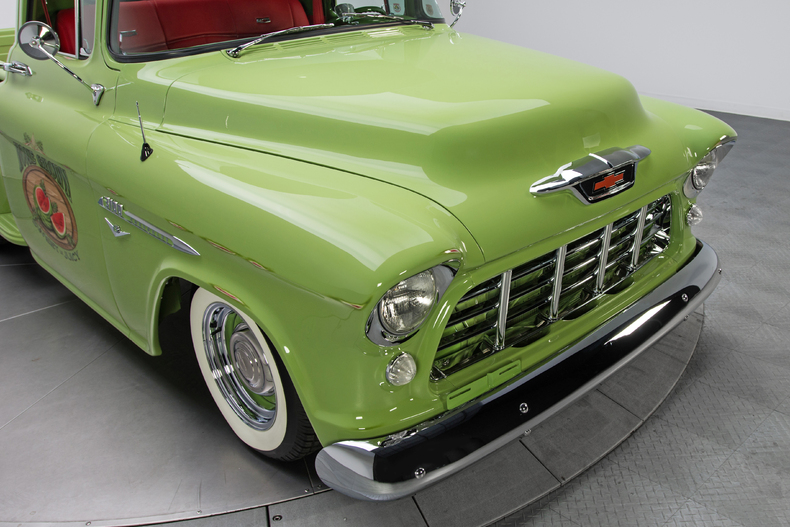 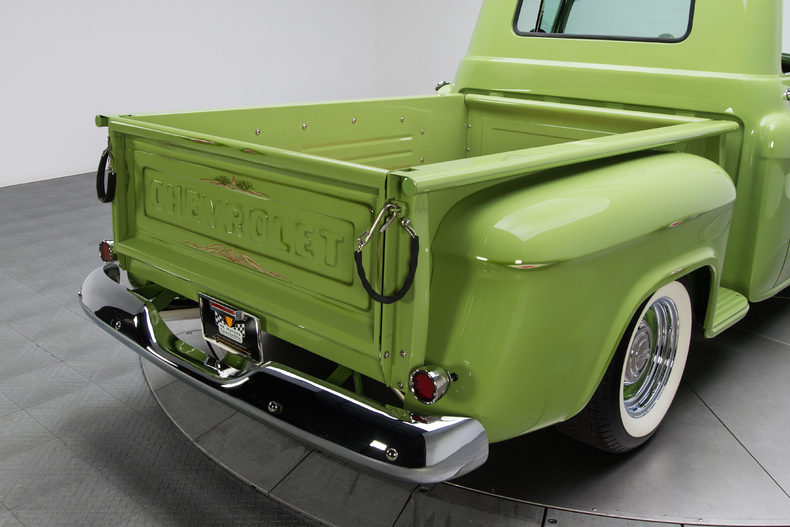 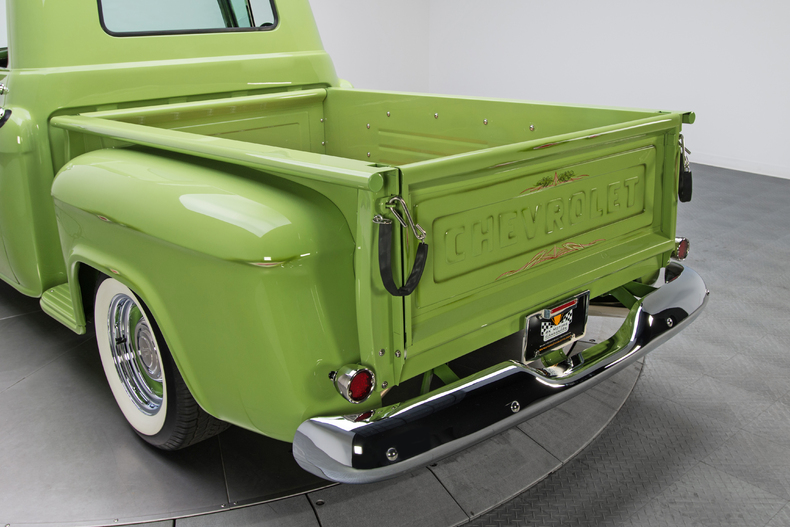 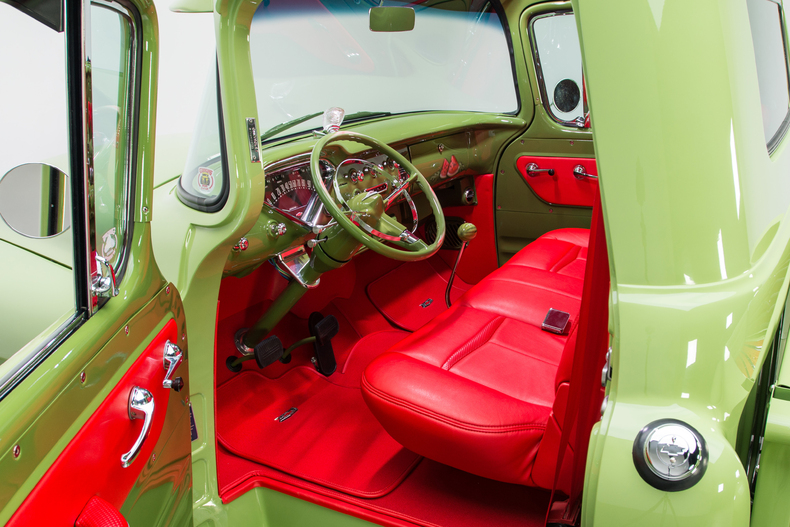 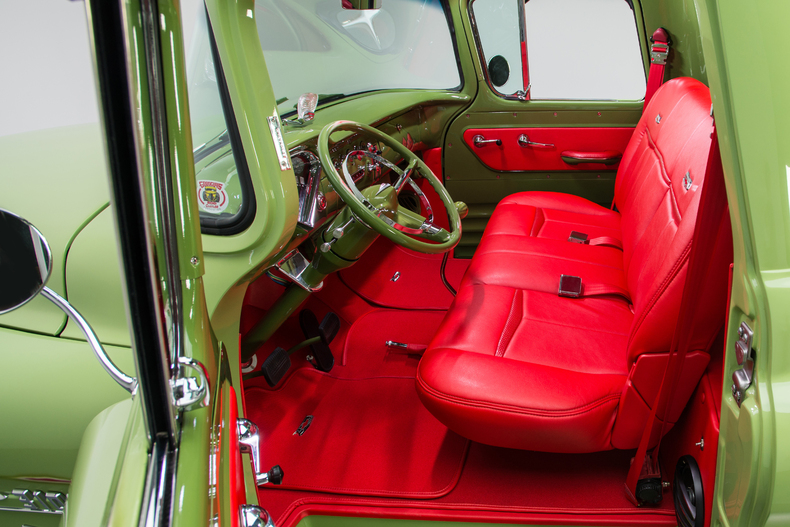 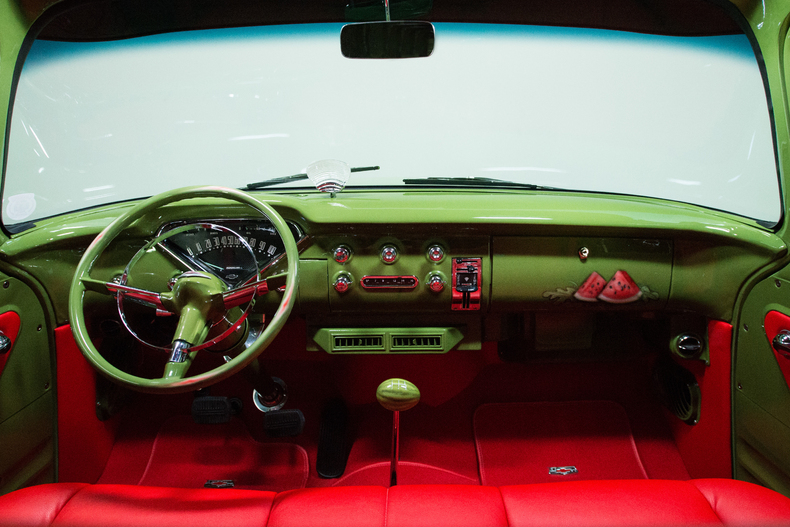 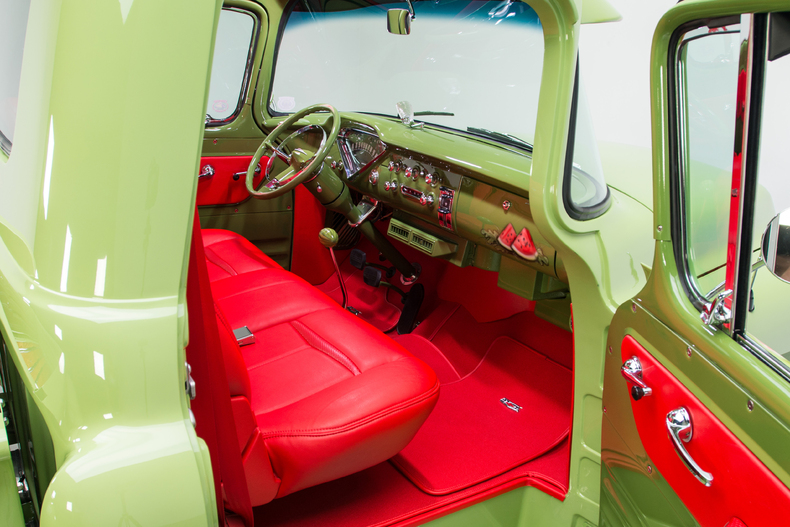 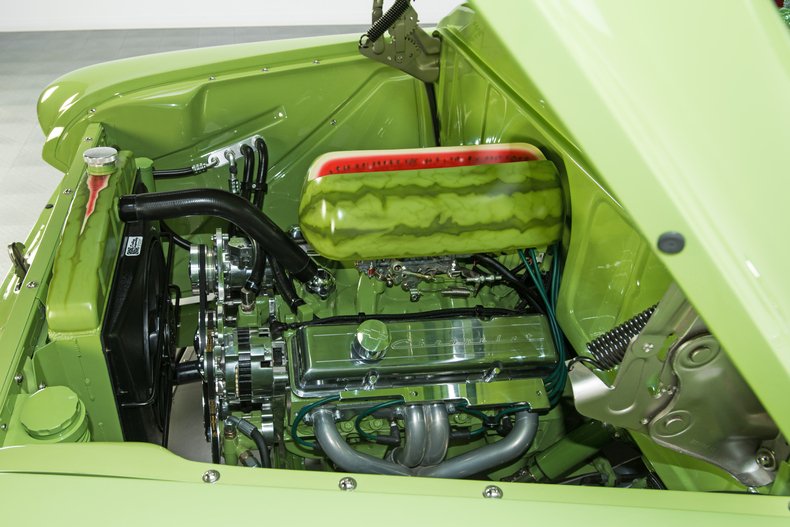 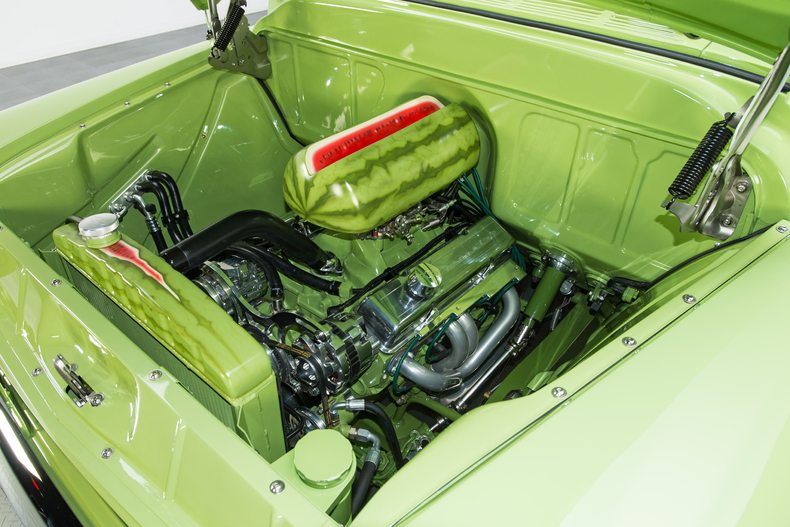 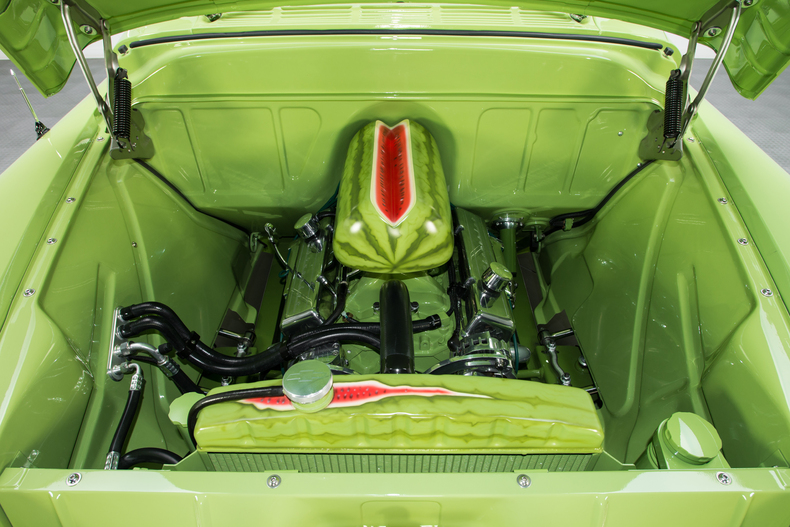 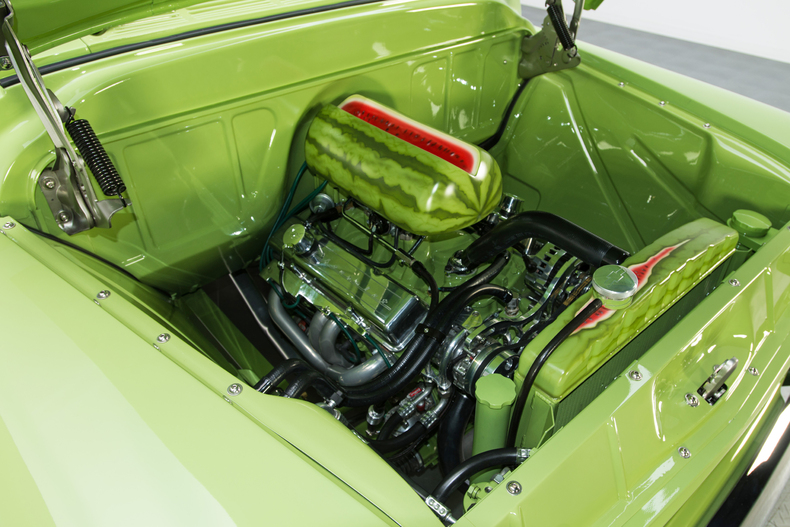 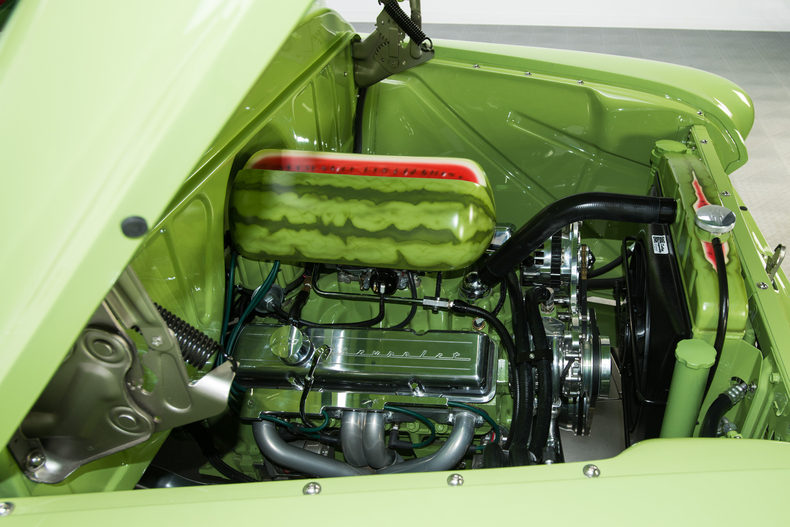 During the dark days of 70s emissions systems, there was stalwart gearheads. During the disarray of the 80s malaise scene, there was hardcore gearheads. And even now, with increasing cost of ownership becoming the norm, there are still diehard gearheads. No matter where the future leads, there will ALWAYS be lifestyle enthusiasts who build a culture around the rush of turning transportation into art; and unless you’re one of us, it’s something you’ll never understand. So, what happens when a bona fide automotive power couple executes a 45 week build with virtually no limits? You get a mind numbing head turner like this 1955 Chevrolet 3100! The product of an uncompromising vision and many talented builders, this stunning Chevy wraps a 375 horsepower small block and 5-speed Tremec transmission in a custom suspension and one-of-a-kind appearance. And, if you’re a fellow enthusiast who’s looking to satisfy an unrelenting need to win trophies and make a big statement, it’s the magazine featured pickup of your dreams!

Flo and Gary Garman had built cars before. Their first project, a ’55 Chevy sedan entitled ‘Fun’, took 35 weeks from start to finish. Then, as if that wasn’t impressive enough, ‘Juicy’, a second ’55 Chevy sedan went from concept to show queen in a mere 25 weeks. Now, when I say “built”, I don’t mean called shops and scheduled work. This dynamic duo hauled the cars to their 2.5-bay garage, rolled up their sleeves and made the magic happen. The third time around, Gary wanted to build a ’55 Chevy truck. With an easy approval from Flo, he hit Craigslist and promptly found a 10 year long project that had stalled with a disinterested owner and boxes of parts. The only stipulations on this newfound cruiser were: 1) Gary wanted a red interior and 2) Flo wanted a green exterior. Adopting a color combo that was obviously ripe for a theme, the couple ruled out Christmas, nixed stoplights and settled on what seemed like the next logical choice: watermelons. And, with the stage set, they shopped salvage yards, perused the Carlisle flea market and started the stopwatch on their latest “Home Grown” creation.

Work began with Flo part-sourcing while Gary, with the help of expert body technician Butch Grossman, patched and welded the truck’s exterior panels. The cab was shipped to family friend Chess Sprenkle of Chess Sprenkle Body & Paint in York Haven, Pennsylvania. And, upon its return, carefully ground welds were sealed in custom PPG green that’s based on a cool combination of Home Depot and Martha Stewart paint swatches. Remarkably smooth and ready for assembly, random parts migrated out of Gary’s homemade paint booth after Flo’s usual ritual of wet-sanding. ‘Ripe watermelon wear marks’ and custom door logos came courtesy of family friend Dane Geesey of DGeez Signs & Graphics in Yoe, Pennsylvania. And, in late 2011, the truck rolled into the Maryland East Coast Indoor Nationals to claim the first of its many awards. Today, this stunning Half Ton is a unique combination of time, talent and exceptional attention to detail. And with its killer paint, stalwart small block and stylish leather interior, it’s the kind of top notch custom that’s guaranteed to make you weak in the knees!

As expected, this awesome Chevy’s first rate detailing highlights both its solid form and stunning paint. At the front of the truck, a polished egg crate grille rides between chrome-trimmed headlights, bullet-style parking lamps and a bright chrome bumper. Above that grille, a Bel Air-inspired hood hangs a prominent Chevrolet crest in front of stainless-trimmed glass, appearance-specific wipers and a modified Truck Shop visor. At the sides of that hood, body-matched emblems and a short antenna combine with aftermarket mirrors, chrome door handles and a locking, bowtie-branded gas cap to detail a clean ‘flow though’ profile. Opposite those emblems, a spectacular Oak bed is held down by spotless stainless skid strips. And at the back of that bed, an embossed tailgate loops sleeved chains over a polished tag bracket, LED tail lights and a second chrome bumper.

Hoist this custom’s rolled hood and you’ll find a 355 cubic inch Chevrolet V8 that, thanks to the pros at American Speed, creates a stout 375 horsepower. At the top of the blueprinted mill, a watermelon themed air cleaner, custom-fabricated from two Freon bottles, forces wind into a coated Street Avenger carburetor that’s juiced by a coated Edelbrock fuel pump and polished stainless fluid lines. At the base of that Holley, a green Edelbrock intake hangs a green distributor between Chevrolet-branded valve covers and polished wire looms. Below those looms, green plug wires snake around coated Doug’s headers. And in front of those headers, attractive Tru Trac pulleys spin a modern power steering pump between a polished alternator, a polished AC compressor, a Cooling Components puller fan and a watermelon-detailed Griffin radiator. Aesthetically, both the bright green small block and its assortment of hand-picked accessories look right at home seated low in their smoothed and body-matched frame. And details like bowtie-branded caps, a high-torque mini starter and Goodyear Gatorback belts ensure this truck runs every bit as good as it looks.

Shimmy under this Chevy and you’ll find a super clean undercarriage that’s been prepped, primped and polished to match the truck’s slick engine bay and stunning exterior. The dressed 355’s power flows from a familiar Tremec TKO600 5-speed to a narrowed Bronco rear end that’s fitted with 3.50 gears and a posi-traction differential. That proven axle pushes the truck on green Chassis Engineering leafs, which are attached to equally green shocks. Tracking is provided by a Fatman independent front suspension, which is complete with polished control arms, 2-inch drop spindles and Fatman power rack and pinion steering. Quick stops are a cinch thanks to power 4-wheel disc brakes. And that chassis hangs from a body-matched frame that’s been sandblasted, boxed and filled. At the center of that frame, large-diameter, true-dual exhaust routes ceramic coated pipes through an X-shaped crossover, throaty Flowmaster mufflers and polished stainless tips. At the corners of the floor, 15-inch Wheel Smith Smoothies throw torque through 205/70 front and 255/60 rear Diamond Back Classic whitewalls. And everything, from the truck’s modern brake booster to its braided brake lines, is well-planned, exceptionally executed and ready to roll!

But the show doesn’t stop there. Not by a long shot! When you pop this pickup’s doors, you’ll find a fully insulated cockpit that features glowing leather surfaces. Top dead center, a chrome-detailed dash hangs Classic Instruments gauges between a Custom Autosound head unit, Vintage Air climate control and a small Guide traffic light viewer. In front of that dash, a sculpted seat, which was cribbed from a 1995 GMC Safari, centers chrome crests between small panels, stainless handles and textured, Chevrolet-branded steps. Below that seat, fresh California Carpet balances color-keyed and chrome detailed floor mats between custom kick panels, big Pioneer speakers and a watermelon-topped shifter. Opposite that carpet, a basket weave headliner perfectly complements modern shoulder belts and cool, basket weave sun visors. And in front of the driver, a painted Ididit steering column spins a small-diameter wheel around an airbrushed center piece and high quality Haywire wiring.

This pristine Chevy has garnered MANY prestigious accolades. Here’s a chronological list of the truck’s major awards: