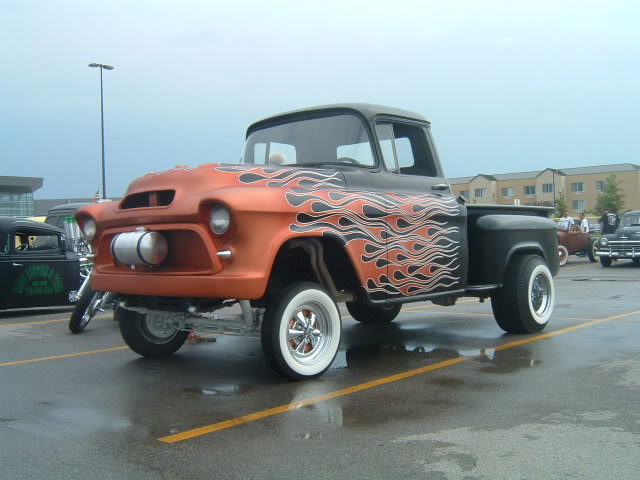 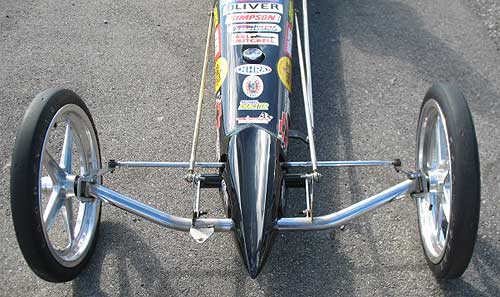 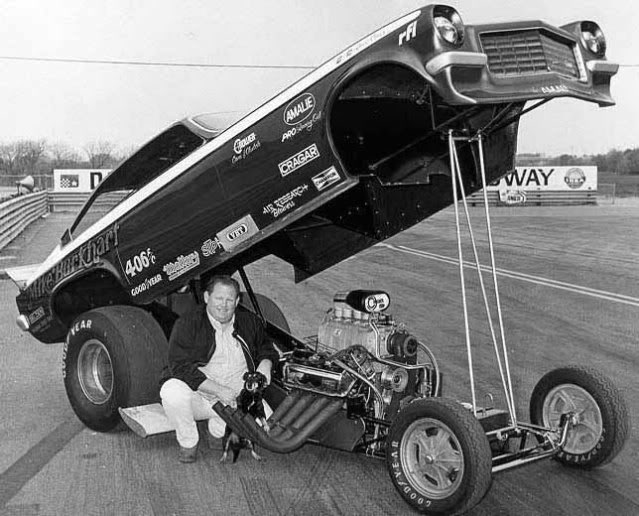 Evolution of the term over the years

The term "Gasser" is a vulgarization of NHRA's classification that was originally "Gas Coupe/Sedan".

The main purpose of this classification was to have a place to race cars with seriously modified engines. Virtually anything was legal, right up to supercharging, but the cardinal rule was that the distance of the number one spark plug hole to the spindle where the wheel mounted had to be within ten percent of the wheelbase. That is, if the car has a 100-inch wheelbase, the #1 spark plug could legally be no farther back than ten inches behind the center line of the front spindle.

Gassers had to have all their fenders mounted basically unaltered, but bumpers could be removed. Gas Coupe/Sedans were classified by weighing the car and dividing the weight by the engine displacement. In the beginning, an "A"-class car was 0-9 pounds per cubic inch, a "B" was 9-11, a "C" was 11, and "D" Gas was 13 and up. The following year, an "E" class was added for cars with over 14.6 pounds per cubic inch. Flathead and inline six-cylinder cars (there were no V-6's back then) were kept separate, so they didn't have to compete directly with the OHV V8's. There was one combined "Gas" class for Flatheads and inline 6's.

The next step up was "Altered" or "Roadster" class, (depending on whether the car had a top) which allowed a 25-percent engine setback. "Altereds" and "Roadsters" also could move the body back on the frame, and run without fenders. No interior was required. These were race-only cars.

"Street Roadsters" had the same basic rules as Gassers, but the fender rule was more flexible at times. It changed periodically, but motorcycle fenders were allowed in lieu of stock fenders up front, at some point. It was a "ten-percent engine-setback" rule class, like the Gas Coupe/Sedans.

In the late '50s guys returning from military duty in Korea began experimenting with GMC Roots type blowers adapted from Detroit Diesels they had wrenched in the military to the new V8s coming out of Detroit and began out running normally aspirated gas coupes and sedans. To make things more fair NHRA created a separate class for the supercharged cars and designated them with an S; A/GS, B/GS, C/GS etc. These cars had similar weight breaks to unblown classes to identify qualifying cars. Interestingly, this is the only class of cars that have been singled out with a supercharged identifier.

By the mid '60s the Gasser classes had morphed into pretty much a pre-war Willys class since the cars fit the class specifications almost perfectly. They were feather light, had reasonably strong ladder frames, accepted the biggest Hemi with surprisingly little work and had 102" to 104" wheelbases which just fit the 100" minimum NHRA limit. Ford Anglias, Prefects and a few other English cars were cleaning the Willys' clocks in match races but couldn't compete in NHRA events due to their sub-100" wheelbases. IHRA and AHRA began allowing them in so NHRA had to capitulate and open the Gas classes to the small English cars which instantly made the Willys less competitive.

However this dominance was short lived when racers started using the new Pony cars (Mustangs, Camaros, etc.) which had far superior aerodynamics. Funny thing is this conversion to modern cars killed the fan enthusiasm for the Gassers since instead of being Willys and Anglia that were smoking and spinning wildly from side rail to side rail and doing wheelstands at launch, the Gas class race cars were boring every-day door slammers. To spark fan interest in the modern Gassers again, NHRA and racers began experimenting with the cars by hollowing out inner body panels, moving the bodies back/front and rear axles WAY forward and engines WAY backward morphing them into the Factory Experimental or FX classes. Of course it was a short journey from there to the present day Fuel Coupes, aka Funny Cars. So actually the amazing Gassers didn't die out, instead they simply kept up with the times becoming what the rules dictated to be competitive. 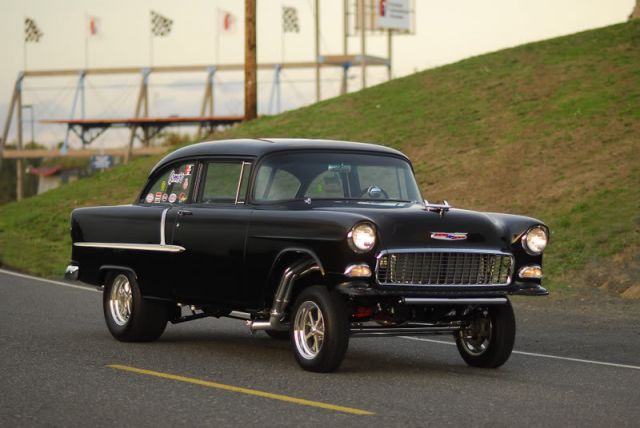